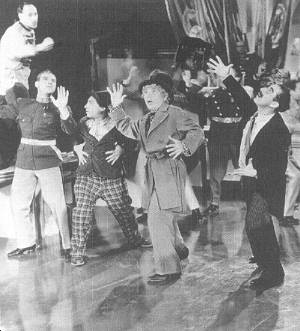 This picture marks the return of Margaret Dumont to the fold for perhaps the most bizarre Marx Brothers film ever made. The action takes place in the mythical country of Freedonia. Mrs. Gloria Teasdale (Margaret Dumont) is unwilling to continue to finance the country's treasury unless Rufus T. Firefly (Groucho) is appointed leader. Trentino, the ambassador from neighboring Sylvania, plans to take over Freedonia. Having failed at revolution, he decides to do so by marrying Mrs. Teasdale. To aid him, he hires Chicolini (Chico) and Pinky (Harpo) to keep an eye on Firefly and report on his doings. Edgar Kennedy adds to several hilarious sight-gag scenes played out with Chico and Harpo.

As Firefly's secretary, Bob Roland, Zeppo has even less to do in this picture than in the previous four, so it isn't surprising that this would be his last film. There was no love lost between Groucho and Zeppo; Zeppo was tired of being second banana and Groucho simply wanted him to stick to his traditional role as "the juvenile lead." Deprived even of this status in Duck Soup, Zeppo finally walked.

This film is usually billed as a "political satire," but "political farce" is more accurate. The war scenes at the end of the film are incredibly surreal for the time. This film also contains the famous mirror sequence.

If you'd like to read transcriptions of dialog from the film, try these links: His Excellency Is Due! (a reception is given in honor of Firefly), Secretary Of War (Firefly offers Chicolini a job in his cabinet), and The Trial (No, not the Kafka one with Tony Perkins...in this trial, Chicolini is charged with high treason).

FIREFLY: To my dentist. Er .. 'Dear Dentist: Enclosed find cheque for five hundred dollars. Yours very truly.' Send that off immediately.
BOB:I'll ... er I'll have to enclose the cheque first.
FIREFLY: You do and I'll fire you.

In "Harpo speaks" one of the pictures is captioned, "Innocent Bystander watches Edgar Kennedy and small friend exchange slow burns, in 'Monkey Business'." The "small friend" is Billy Barty. The scene with Barty was cut before the film was released. 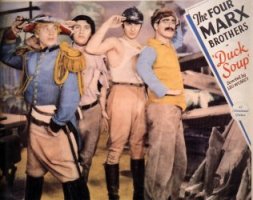 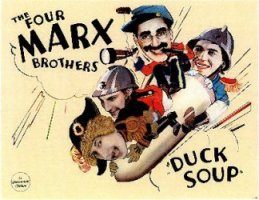 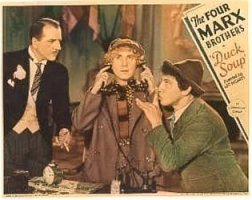 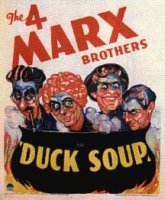 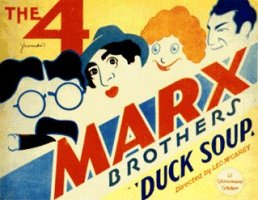