The third film released in 1931 was their first with a script made for the screen and their first made in Hollywood.

In this outing, the boys are stowaways on an ocean voyage. Apart from a bit involving a couple of gangsters trying to put each other out of business, there's very little plot to get in the way of the gags. Speaking of gags, Groucho brought in his uncle, Al Sheen, to write plenty for this picture. If you're looking for sheer Marx Brothers zaniness without any unnecessary musical numbers or subplots, this is a movie for you.

According to Frank Bland, this picture also contains the funniest line ever delivered in a Marx Brothers film by a non-Marx Brother:

Captain: "Stowaways? How do you know there are four of them?"
Steward: "Well, they were singing Sweet Adeline."

Opinions are split about whether you can hear Harpo's voice when the stowaways sing "Sweet Adeline".

Speaking of stowaways, check out "That's The Bunk," a very funny scene from the film, featuring Groucho, Chico, and the Captain.
MAN: What's the idea putting your hand in my pocket
CHICO: Just a little mistake. I had a suit once just looked like that, and for a moment I thought those were my pants.
MAN: How could they be your pants when I've got them on?
CHICO: Well, this suit had two pair of pants.
Related Links 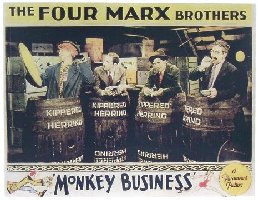 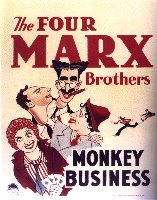 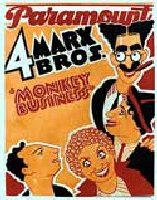