Vaudeville shows and other appearances of the Marx Brothers 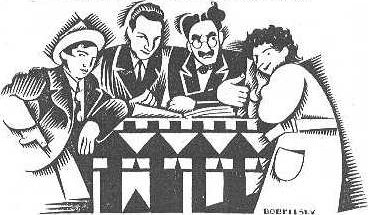 Here you get a glimpse into the past, when prohibition was in full swing, the movies hadn't yet found a voice, and the Marx Brothers were filling Broadway theaters to capacity and bringing down houses on a regular basis. Groucho was starting to get his writing published in various prestigious publications and Harpo had been adopted by the Algonquin wits.

You can take a look at theater programs for each of the Marx Brothers' three Broadway hits (I'll say she is, The Cocoants and Animal Crackers), or read dialog from these shows that never made it onto film. You can also read reviews of these shows by such luminaries as Percy Hammond and Alexander Woollcott.

When they moved into film they did not stop touring completely. During their movie career they took some material on the road to test it before a live audience, and later in live they made solo tours, especially Chico who toured with a big band.

Here is lists of shows which the Marx Brothers presented on stage: