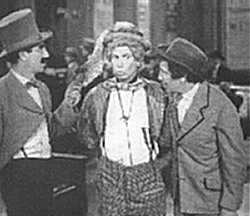 For the first and last time, the Marxes went back in time for a picture (unless you include Irwin Allen's 1957 picture, The Story Of Mankind, where the three brothers all appeared, but in different scenes). It's 1870 and the boys are trying (for various reasons) to migrate west. After a comical scene where the three are trying to swindle each other for train fare, we find them in the west without any logical explanation as to how they actually got there.

Terry Turner (John Carroll) is in a bind. He wants to marry Eve Wilson (Diana Lewis), but her grandfather won't allow it. It seems that Terry's granddad sold Eve's grandpappy a worthless piece of land some forty years earlier, and he is unwilling to let it slide. Terry tries to smooth things over by talking the New York and Western Railroad into purchasing the land, known as "Dead Man's Gulch," to use as part of the route for their line west.

Unfortunately, Wilson has given the deed to brothers Joe (Chico) and Rusty (Harpo) Panello as security on a 10-dollar loan. Beecher (Walter Woolf King) wants to get a hold of this land himself, so he can force the railroad into buying his own land for the same purpose, at his price. Enter S. Quentin Quale (Groucho), who would like to swindle the Panello brothers, but winds up joining with them in trying to thwart Beecher's plans.

Chico livens up the proceedings with one of his most creative piano solos to date, and Harpo entertains us on a makeshift harp, improvised from an Indian's loom. The climactic train ride is brilliant.

JOE: All we want to know is where is the train?
QUALE: The train? It's out on the tracks. It seldom comes in here. 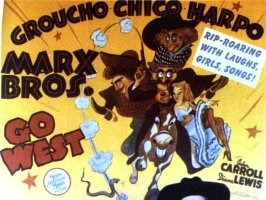 Humor Risk — The Cocoanuts — Animal Crackers — Monkey Business — Horse Feathers — Duck Soup — A Night at the Opera — A Day at the Races — Room Service — At the Circus — Go West — The Big Store — A Night in Casablanca — Love Happy — A Kiss in the Dark — Too Many Kisses — The House That Shadows Built — Hollywood on Parade No.5 — Hollywood on Parade No.9 — Screen Snapshots — La Fiesta de Santa Barbara — Hollywood: The Second Step — Yours For the Asking — Sunday Night at the Trocadero — Screen snapshots No. 2 — Screen snapshots No. 8 — Stage Door Canteen — The All-Star Bond Rally — Copacabana — Mr. Music — Double Dynamite — A Girl in Every Port — The Story of Mankind — Will Success Spoil Rock Hunter? — Showdown at Ulcer Gulch — Got It Made — Skidoo
Home NEWS Biography Movies Today in Marx history on DVD and Blu-Ray Books on CD, LP etc. Shop Vaudeville Radio TV Quotes Media Files on VHS, LaserDisc etc. Links Posters Memorabilia Music Pictures Games Marxes in the Sky Miscellaneous Feedback/Discussion auf Deutsch