A Technicolor short subject narrated by Pete Smith, featuring a variety of young starlets and recognizable Hollywood "names."
The starlets...including the always effervescent "Toby Wing"...smile at the camera just long enough to tease. Its doubtless these appearances did their careers any good, although it may have "bought them some time" with the prevailing producers.
Three girls who do manage to make a strong impression are The Gumm sisters, featuring Judy Garland in one of her earliest screen appearances (an excerpt of this appearance was featured in "That's Entertainment!" in 1974). "The Gumms" sing a spirited version of "La Cucharacha!"
Harpo's "fifteen seconds of fame" occur early in the proceedings. He is shown seated outdoors at a patio table, taking some "swigs" out of two gaily colored Mexican-styled bottles. Of most interest, perhaps, is the fact that he is NOT wearing his wig.
Instead, he is sporting ceremonial Native American headgear, with several brightly colored feathers surrounding his otherwise-naked forehead. (For what it is worth, you can see his natural hair, which is reddish-brown.)
He's smiling broadly, and playfully "drinking" tequila (presumably). Pete Smith's narration is as follows: "Harpo enters into the spirit of the fiesta, while the spirits of the fiesta enter into Harpo. 'Time Marxes On!'"
There is another feeble reference to the Marx Brothers, however. In a painfully labored sequence in which celebrated drunk and Three Stooges torturer Ted Healy is incorrectly informed that he had appeared in "A Night at the Opera" (note "clever" plug by M-G-M for its late-1935 release). "No, no, no," protests Mr. Healy. "That was with the Four Marx Brothers!"
(Jay Hopkins) 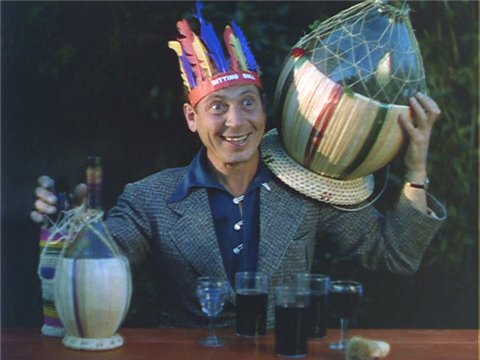