[The following text uses material from the Wikipedia article about Humor Risk.
The text of this page is licensed under the GNU Free Documentation License (this excludes images and externally linked material)] 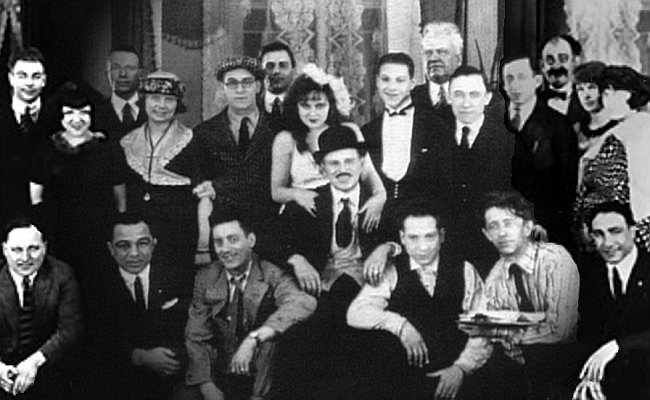 This silent film was the first (but never released) Marx Brothers film, and is presumed lost. It may have been destroyed by Groucho, who is said to have burnt the negative after a particularly bad premiere screening. It is also said that the print was accidentally thrown away when left in the screening box overnight.

All four Marx Brothers are known to have been in this short film. It was the last film directed by Dick Smith (1886-1937), and the first film written by Jo Swerling.

The film was made privately by the Marxes with money from friends.

Information about the film's premise is sparse. Its title was "apparently a spoof of the then-popular drama Humoresque, one of the biggest film hits of 1920." In addition, "the brothers were working separately rather than as a team" and did not incorporate their trademark comic personalities that they would later become famous for. Harpo played the hero, a detective named Watson who "made his entrance in a high hat, sliding down a coal chute into the basement." Groucho played an "old movie" villain, who "sported a long moustache and was clad in black." Chico was probably his "chuckling [Italian] henchman." Zeppo portrayed a playboy who was the owner of a nightclub in which most of the action, including "a cabaret, [which allowed] the inclusion of a dance number," took place. The final shot "showed Groucho, in ball and chain, trudging slowly off into the gloaming." Harpo, in a rare moment of romantic glory, evidently gets the girl in the end.