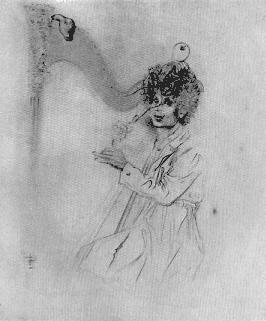 Drawing by Salvador Dali
from an article in Theatre Arts Monthly, October 1939

Harpo was the second oldest and the one who never spoke. Not entirely true. He spoke quite regularly on stage until the production of "Home Again".
Les Marsden had some more information about Harpo's 'speaking career': "He still had a about six lines in "Home Again", but uncle Al Shean simply didn't think he delivered lines all that well. Harpo was so upset that after they had toured the show in vaudeville for awhile and were playing (according to Harpo) the theatre in Champaign, Illinois, Harpo decided to ad-lib all through the performance. A critic in the local newspaper described the show by saying, in part, "Adolph Marx performed beautiful pantomime which was ruined whenever he spoke." Harpo then decided he could do a better job of stealing focus by not speaking. And he really did continue to speak on stage regularly - just whenever he felt like it. For example, on opening night of 'Animal Crackers' he tackled Margaret Irving and proceeded to tell her a well....let's just say a questionable joke. Groucho, Chico and Zeppo came out onstage and did a running commentary. But he did speak extemporaneously onstage on occasion. Just not from a script and not often. Steve Allen has told me (and has also recounted the tale in various books, etc) all about the evening Harpo left show business during Allen Sherman's show in Pasadena, during which he spoke for several minutes to a stunned audience."

Harpo was given the name Adolph, but changed it to Arthur during World War I because it was too 'German'.

Through Alexander Woollcott the theater critic, who was responsible for their first big success in New York, Harpo became a member of the Algonquin Round Table.

Harpo on I Love Lucy

Harpo never spoke in a movie, but his voice has been recorded, as you can hear here.

"Harpo rarely played the same harp twice in a movie, and in some movies didn't play a harp at all (Go West harp is actually a loom, At the Races is the dismantled frame of a grand piano, and Duck Soup....well, we all know about that one.) They were usually his own harps but he changed models a lot, particularly in the early years. Eventually, he owned two Lyon & Healy Gold-Gilt Concert Grands, model #24. He had those two harps for years and shortly after his death, Susan was asked to judge a harp competition in Israel. She insisted that Bill come along as well because she knew nothing about the mechanics of harpistry. They both decided to take the two harps along and donate them to two university harp departments in Israel, with the only proviso being that they were not to go in glass cases, but instead were to be used. Upon arrival in Israel, the customs agents demanded a 100% duty payment from Susan and she said 'what? I'm trying to donate these harps to you!' and was ready (as she told me) to get back on the plane and take the damn harps back home when a governmental official broke through and announced that they'd be happy to take the harps for free! I've heard from other sources that the harps were marked as Harpo's with small plaques but that they indeed were (and hopefully still are) used as Susan intended." © Les Marsden, 1998

Susan Marx died in December 2002. Here is a news item about her:

Susan Marx died shortly before midnight Sunday [22 Dec 2002] at Eisenhower Medical Center after suffering a massive heart attack. She was 94.
Her son, pianist Bill Marx, was at her bedside just hours after concluding a talk about his father in a benefit for the Jewish Community School with a rendition of "Sunrise Sunset."
Bill Marx said there were three phases of his mother's life: her early show biz life as Susan Fleming, her personal life as Mrs. Harpo Marx, and her life of public service as Susan Marx.
Born in Brooklyn, she started her career as a stage actress, working her way up to the top musical revue on Broadway, "The Ziegfeld Follies," in the 1920s.
She followed the opportunities to Hollywood in 1931 when she appeared as John Wayne's love interest in "Range Feud." As a Paramount actress, she actually made more movies than the Marx Brothers, with her peak coming in the 1932 comedy "Million Dollar Legs" with W.C. Fields.
Her best friend, Gloria Stuart, co-star in the blockbuster film "Titanic," remembered she got a big Hollywood buildup for that film.
"The publicity was, she was Susan Fleming with the million-dollar legs," Stuart recalled. "She starred, and her legs were insured for a million dollars."
But Bill Marx said his mother hated the movie business. When she met Harpo Marx at Paramount, she courted him -- even proposing to the silent Marx Brothers comedian three times.
She and Harpo adopted four children.
She began studies to enrich her life with Stuart, whose husband wrote for the Marx Brothers. They studied cooking, stamp collecting and Bonsai tree-shaping.
"She was very forthright, certainly beautifully centered," Stuart said. "When she took up one of her various interests, it was always 100 percent."
Susan Marx is survived by her four children, Bill of Rancho Mirage, Alexander of Vallejo, Jim of Paso Robles and Minnie Eagle of Orange. She had five grandchildren and two great-grandchildren.

Important dates in the life of Harpo Marx: