The Marx Brothers
Waiting for Groucho

After a successful run at the Edinburgh Fringe Festival (see below) "Waiting for Groucho" is coming to the Tron Theatre in Glasgow from the 17th to the 20th of October. 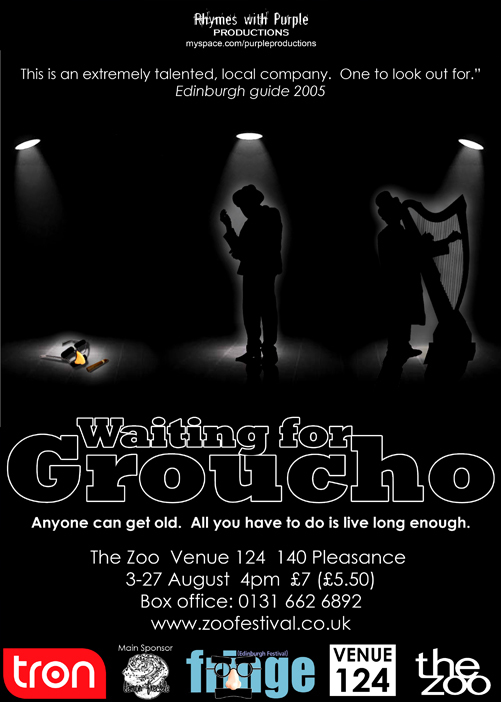 A journey from vaudeville to Hollywood stardom and, eventually, comedy legend.

"Waiting for Groucho" is an imagined conversation in which the Marx Brothers reminisce on their journey from two-bit vaudeville performers to Hollywood legends. A merry melange of mirth & mayhem.

In 1959 Groucho, Harpo & Chico Marx reunited to film the sitcom, "The Deputy Seraph". Two years later Chico died ending the 56 year reign of the Marx brothers as the most successful and well-loved entertainers of the 20th Century.

In 1961 Chico was the first of the Marx Brothers to die, bringing an end to a 56 year long career as the most famous comedy act in Hollywood.

An abandoned sitcom, "The Deputy Seraph", was the final project that they would work on together but it would not be the last time they met. Harpo and Chico are waiting for Groucho to arrive, he's late and they can't go on without him.

"Waiting for Groucho" is an original piece of writing from Rhymes with Purple Productions, it marks the second play by Louise Oliver, one of the company directors, following her 2005 success with "A Work In Progress".

Featuring a talented Scottish cast this theatrical comedy tells a well-researched history of The Marx Brothers as an imagined and absurd autobiography.

Rhymes with Purple Productions is a Glasgow based Theatre Company and entertainment agency committed to pushing the envelope for Scottish arts and culture. We are a new writing company as well as producers of classic work with a contemporary twist.

If you like thought provoking theatre with a fun and playful edge then we're the company for you. We are keen to create artistic links with international theatrical practitioners and create awareness of Scottish arts across the globe.

Past projects include A Work In Progress by Louise Oliver - a fast-paced and irreverent re-interpretation of some of the key moments in theatrical history which sold out its run at the Tron Theatre and went on to be the top-selling show at its Edinburgh Fringe venue
A second sell out run at the Tron Theatre with Lazybed by Iain Crichton Smith in October 2006.
Appearances with Club Noir (the world's biggest burlesque club) and at the Cafť de Paris, London
A comedy night at the Stand Comedy Club with some of Scotland's top comedians and an evening of classic cabaret and burlesque in association with Tron Catering Ltd.

"This is an extremely talented, local company. One to look out for."
Edinburgh Guide 2005

A Work in Progress was listed in The Sunday Times as Critics Choice.

"An evening of unashamed fun with Rhymes with Purple ... lively, enthusiastic in the extreme and met with a brilliant reception ... a great success"
www.rockyscot.co.uk

"It's good to see a young, shoestring company delving into the more neglected corners of the Scottish repertoire"
The Scotsman 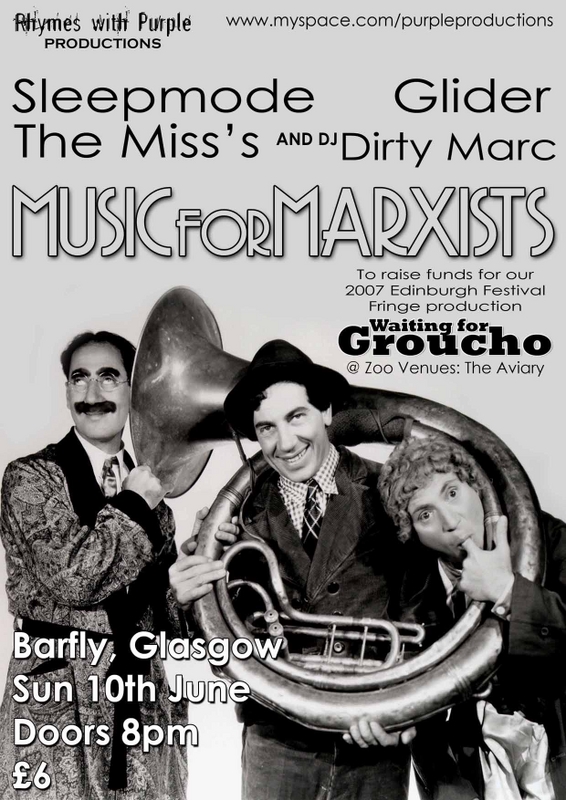